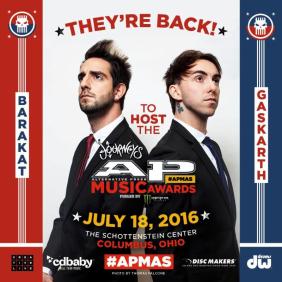 The Alternative Press Music Awards are an annual award show presented by Cleveland-based music magazine Alternative Press. The inaugural ceremony began at Cleveland’s Rock and Roll Hall of Fame in 2014, and reportedly moved to Columbus this year due to the city of Cleveland hosting the Republican National Convention. Taking place at the Schottenstein Center just north of the Ohio State University campus, this year’s awards show encompassed live performances, video interviews, memorable speeches, and lots of playful banter between hosts Jack Barakat and Alex Gaskarth of All Time Low.

My favorite part of this year’s show were the performances, which made the event feel more like a music festival than a black tie affair. Ranging from 90s rock to metalcore and everything in between, the performances made what could have been a lackluster evening a night to remember.

Opening the ceremony were Mayday Parade and The Maine performing several of their well-known songs. The Maine, decked out in matching leopard-print suits set the standard for formal alternativeTM dress for the evening. Joined by Stephen Jenkins of Third Eye Blind, the set culminated in a joint performance of classic 1990s song “Jumper,” with the small percentage of the audience who were actually alive in the 1990s enthusiastically singing along to every word.

You should never judge a band based on what you read in the alternative tabloids. I spent years dismissing Issues based on clickbait articles and butthurt commenters. When the band took the stage I turned to my girlfriend and said “you would probably like this band.” Before their first song was over, I was hooked. They mixed metalcore with modern rock and R&B style vocals but did so seamlessly and without haste. The energy and genuine excitement that they exhibited not only lured me in to their music, but their live performance as well. Issues officially has a new fan.

Another band I spent years discounting was Good Charlotte (I’m beginning to realize now that I’ve been a pretentious music snob all my life). However, while performing songs from their latest album Youth Authority, I heard a much more mature and versatile band than the mall-core singles I heard in middle school. The few songs they performed were contemporary, relatable, and serious enough to be taken seriously. “Life Changes” is a standout, and I suggest picking up Youth Authority to see a new side of an old band.

We all remember screaming our lungs out to Papa Roach’s “Last Resort” when it debuted on MTV in 2000. Hailing from Cleveland, Papa Roach became a veritable force to be reckoned with on early to mid-2000s rock radio and MTV (before it went music-less). After performing another famous hit, “Scars,” the band invited Cleveland-native Machine Gun Kelly to the stage to shut down the house with “Last Resort.” The group had insane stage presence coupled with a song to which many of the audience members had strong emotional ties. Near the end of the tune, MGK even jumped into the audience, singing and moshing along while Jacoby finished the job. I texted my friends after: “I can finally die happy.” Ironic?

Neck Deep is another band which gave me negative first impressions. When they signed to Hopeless Records a couple of years ago, the press release was coupled with the music video for “A Part Of Me.” That was the first time I ever remember feeling old in my entire life. I was only 23 at the time, but damn could I just not relate to what this kid from Wales was singing about. He was probably a teenager at the time, and the lyrical content and music video reflected that. After having won Best Live Band, the band took the stage to perform the following covers:

The band finished their set with an original, featuring Chris Carrabba of Dashboard Confessional. I was never more disappointed than when they exited the stage. I was smitten with the overwhelmingly fun atmosphere of their live show, and earnestly believe that they 100% deserved their Skully for Best Live Band.

This is a group whose vocalist Austin Carlile introduced as being from “Orange County, California,” but who have their origins in Columbus. I spent years hanging around and playing shows with Carlile whose old band, Attack Attack skyrocketed him to alternative-level fame in the late 2000s. After leaving AA, Carlile headed over to Paper Tiger Studios to establish OM&M and begin the long journey to success a second time. I don’t think any of us knew that Carlile would become such a mainstay in the alternative and metalcore scenes, but as he reminded us with his lyrics during the band’s performance: “don’t you ever underestimate me.”

As the night came to a close, the crowd anxiously awaited the headlining performance of Florida band A Day to Remember. A video soon came onto the JumboTron with the members of A Day to Remember lamenting that their singer was stuck in Houston, but the rest of the band would perform anyway. After a cringe-worthy skit and stalling by hosts Barakat and Gaskarth, the band finally took the stage and asked if any audience member could sing some of their songs. A man raised his hand and was given a microphone, responding firmly: “I can.” Well dear readers, that man was Scott Stapp of Creed.

Stapp took the stage and successfully began singing one of ADTR’s pop-punk songs, with looks of confusion and bewilderment from most of the audience. Again, much of the crowd wasn’t even alive in the 1990s, let alone would know who Scott Stapp is. Near the end of their first song together, Stapp stopped the band and suggested that they play something else instead. The entire saga being a hoax and publicity stunt, I was actually relieved when the group began playing hit Creed song “Higher,” instantly bringing me back to singing along to all of my favorite songs on 99.7 The Blitz when I was 11 years old. Imagine my disappointment when after the song was over, the real singer of A Day to Remember came onto the stage and the band played a legitimate set.

When it was all said and done, I was delighted to have attended this year’s Alternative Press Music Awards, getting to see some of my favorite artists perform and win awards, and being introduced to new artists I never would have previously given a chance. I realized that music is not bound by genre, stereotype, or its fanbase – it begins and ends with the connection that the music and the artists make with the listener and that emotional sentiment is without words. If the APMAs ever return to Columbus, I will be one of the first in line to buy tickets and support alternative music.