Shazam is a mobile-based smartphone application that allows users to identify songs from radio, television and film simply by holding their phones toward the audio source. Though I use it sparingly, I’ve racked up over 100 Shazams in the past couple of years and I felt that it was finally time to pursue some of these artists. As I browsed through my list, I realized that there were several bands and even songs which I had captured more than once. In one instance, I even “Shazam’d” the same song three different times, leading me to conclude that it must have been something special. That song was “Soundcheck” by Catfish and the Bottlemen.

As I listened to the song with a new perspective, I spent the first 0:48 seconds perplexed. I didn’t really like it, and I couldn’t even remember having heard it. Then the chorus kicked in at 0:49 and I was immediately hit with an upbeat punk rock anthem that made me want to head-bang at my desk. The first chorus was short and sweet, and moved directly into the second verse within just 14 seconds. That verse already felt familiar to me and I enthusiastically hummed along while anxiously awaiting the next big chorus. The bridge hit around two minutes in and was as sparse as it was haunting. It built into an emotional and tense guitar solo which evoked scenes of chaos before returning to the familiar verse structure and a huge double chorus before ending abruptly. 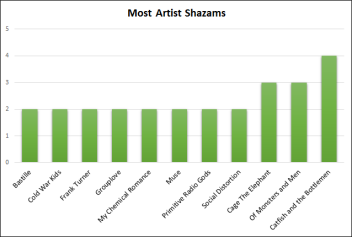 The rest of my data was equally enlightening, as I found eleven artists in total whom I had Shazam’d more than once. Next up was Icelandic folk group Of Monsters and Men, followed by American-turned-English rockers Cage The Elephant. I quickly noticed a pattern in which 45% of my Shazams were indie-rock bands from the UK with California (36%) coming in a close second. At times it can be difficult to discover new music, especially with radio, retail centers and film replaying a lot of the same homogenous drivel. Shazam gave me the opportunity to identify the songs I liked and prompted me to discover and pursue these artists. Many say that technology is hurting the music industry, but with apps like Shazam, technology is only the beginning.